Fellow Photographers,
For years, as a judge, you heard me say that colored photographs look better with black boards/mats.
Well the internet has heard me and came up with the following medical explanation.
Simultaneous Contrast:
What difference does a dark or black mat make? It makes the colors seem more vivid, more alive.
This is due to a perceptual effect known as “Simultaneous Contrast” a phenomenon in which a color appears brighter when surrounded by a black boarder than a white one. Not convinced see for yourself. 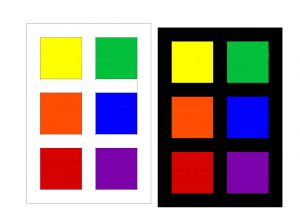